Upgrade your react.js hoc with renderProps

In this blog-post you'll learn how easy it is to turn higher order components into normal components with render props. 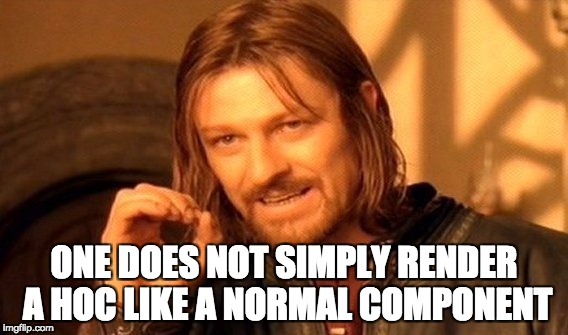 In short, this post is about how you can take higher order components such as connect() from react-redux, graphql() from apollo or any other and use them like normal components anywhere within your render cycle, with the render prop pattern.

Heads up: This is not a rant about higher order components vs render props. In fact the two are very easy to combine and in doing so you can overcome most of the drawbacks of hoc’s. First of all, let’s outline what those drawbacks are:

The disadvantages of higher order components

Higher order components have become ubiquitous! They’ve been the go-to abstraction for composition in the react community. However there are some limitations with hoc’s, here are three of them:

In my experience from writing apps with the pattern - code that uses lots of functional composition can be very hard to penetrate. Having tried this with a bigger teams, I’ve often had feedback that working with such a code-base is harder than it should be.

Render Props to the rescue

You may have heard of the render prop pattern or at least seen it in action. Michael Jackson wrote a great article on the topic. Even if you haven’t heard of it you’ll probably have used it with with libraries like react-router, react-motion or another of the many libraries which use this pattern.

What it boils down to is this: callbacks which are used for rendering, passed down to a component as prop - Hence renderProps.

First, here’s an example to show you how it looks like, taken from the readme of react-responsive

Okay so what’s happening here. As you can see we have an expression inside our MediaQuery component, containing a function. Just by looking at it you can see that this defeats 3 of our problems:

By the way this pattern is actually quite old. Here’s an example of render props from March 2015 by none other then Dan Abramov, weeks before the first commit of redux.

But what if you have a code-base full of higher order components, you can’t just ditch everything right?

Please note - We’re using the children prop here, but really you can use any prop you like.

That’s really all there is to know about this pattern

You now have everything you need to use your higher order components as normal Components, with the freedom to render them dynamically, anywhere in your render cycle.

In case it hasn’t sunk in yet, let’s have a look at some examples. I’ll take some popular higher order components and turn them into normal components with render props:

Probably the most used hoc in our community.

So we define our renderProp component and our mapStateToProps which we need for the connect hoc. Then we wrap our connect hoc around our Render component and voila, we can render it as a normal component:

Another well used higher order component nowadays would be the apollo graphql hoc. Here’s an example of a configured graphql hoc, which we turn into a component with a render prop:

Same exact pattern, wrapping our graphql hoc around our Render component. And now we can render it anywhere:

Recompose is a hoc tool belt. It’s widely used and made by the admirable Andrew Clark. Recompose encourages composition with higher order components and as such it can be very powerful. Let’s consider we have a code-base that makes heavy use of recompose. Here’s an example of a composed higher order component straight from the recompose docs:

Now all we do is wrap it around a render prop component as we have done so far:

Please note: Instead of having a separate component I’m just creating the component definition ( a plain arrow function ) inline for brevity.

And yet again, we can use the hoc as a normal component, anywhere we please.

Here’s one final example using RxJS in combination with recompose, taken straight from the docs:

Let’s not talk too much about the implementation here, you don’t really need to know how RxJS works in order to refactor this component to use a renderProp. All one needs to do is change the render method at the lower half of the component definition. Here’s how that would look like:

All we did here is remove all jsx from the view and simply call the children prop function with the state we need to expose.

So now what I can do is this:

As you can see, I am now completely in control of the actual presentation. All the counter component does is manage and expose the state I need to interact with the component.

I hope this post makes it pretty clear how simple it is to turn your hoc components into render prop components and what power it yields. If you’re excited about this as much as me please have a look at Michael Jackson’s article as well as his presentation at React Phoenix - never write another hoc, gotta love that title :D

Wow you reached the end of the page! Could that mean that you're interested in working together? Please get in touch early to avoid disappointment! My availabilty tends to fill up quickly.

Chat with me here or hit me up on Twitter