Getting started with draft.js

Draft.js is a powerful framework for creating text based editors. It removes a lot of the complexity of working with contentEditable. This is a basic tutorial on how to get started with draft-js.

To start of, let’s use create-react-app to bootstrap a little app

The center piece for draft js is the Editor Component.

It’s a react component and as such, state management is essentially up to you.

Let’s put the editor component into our react app. I’m placing it in src/App.js.

Without reading any documentation, let’s just render the Editor component, this will throw an exception. I like errors (when done well), because they tell us how to properly use something. Here’s my App.js:

The result is this: TypeError: Cannot read property 'getCurrentContent' of undefined.

Right. So this is draft-js telling us that it needs some inital content. If you look at the docs for the Editor component you can see that there are two required props - editorState and onChange. The former is basically the object that draft-js uses for state management, and onChange gives us a callback to update said state. Let’s have a look at editorState.

To quote from the draft-js docs, EditorState is an immutable record that represents the entire state of the Draft editor, including:

To get started, let’s create an EditorState with empty content and give it to our Editor component, here’s my updated App.js

Let’s go through this.

Since draft-js doesn’t do state updates automatically we need to manage updates for it. This is good, we want to be in control of state updates. I mount this in the component state so that I can later update the state with the editors onChange method. 3. Then I pass the editorState to the Editor component in our App components render method:

Now the Editor component will actually render on the page:

But if you look at your console, you’ll see an error: Uncaught TypeError: this.props.onChange is not a function. And if you interact with the editor right now, you’ll notice some weird behaviour. The first keystroke will be missed, it won’t let you undo anything etc.

That’s because we’re missing the other required Editor prop - onChange. Let’s add it and update our state with the onChange method, here’s what we’ve changed:

the method that you mount on the onChange prop gets called whenever a change event happens inside the draft-js editor, this gets called with a new editorState instance, that contains the changes made to it, that may include, as we said above: content-changes, updates to the undo stack and other things. This onChange callback provides an opportunity to do stuff with the update, like saving to a db or localStorage.

Right, so now we have the Editor component working, let’s implement some basic rich text editing with your standard key combinations, like option + b for bold, option + i for italic, option + u for underlined text. Draft-js comes with a utilities to make this really easy. 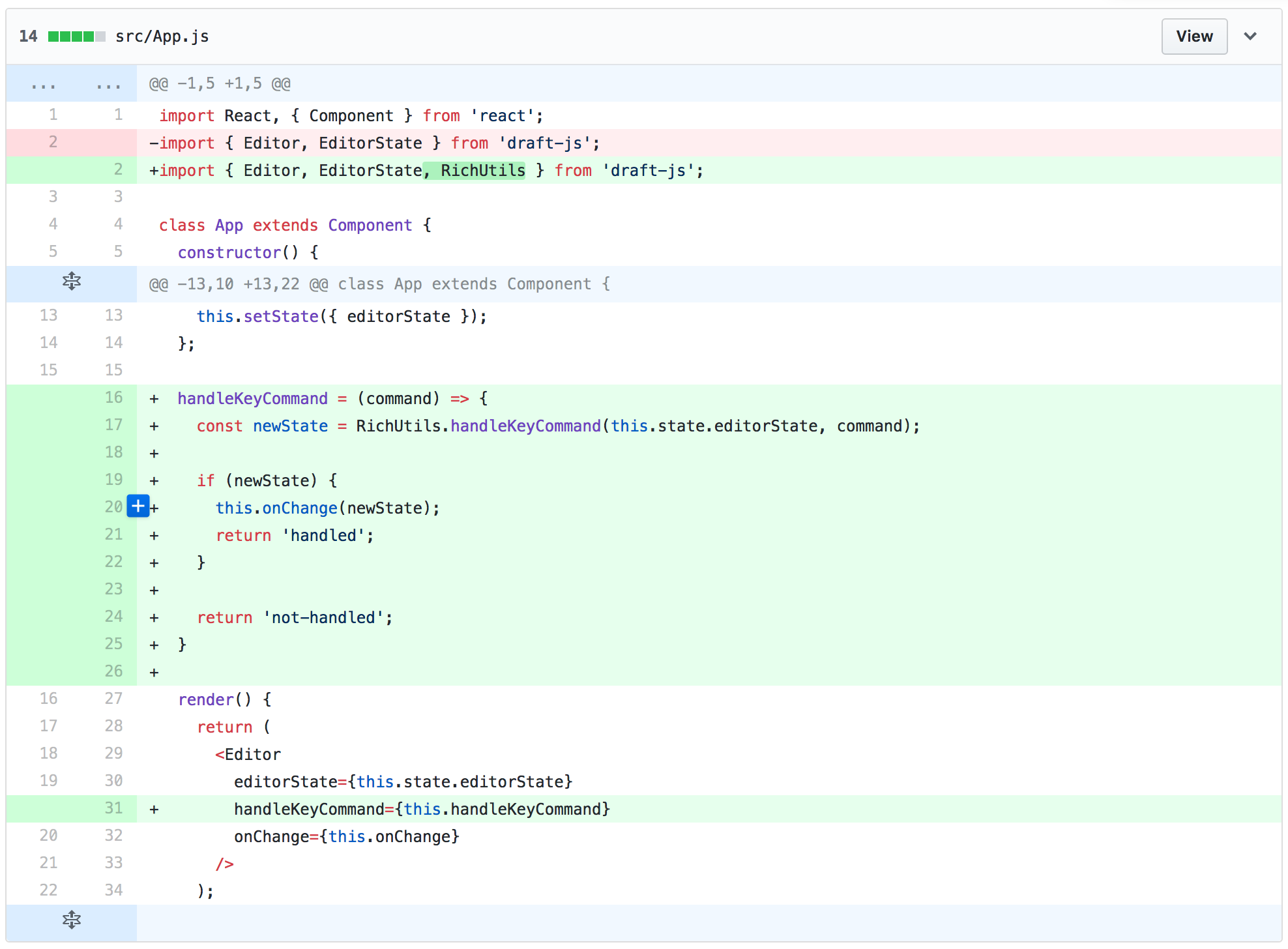 Bear in mind that we need to return 'handled' or 'not-handled' in the handleKeyCommand method to tell the editor that the key command has been handled. Otherwise it’ll fall back to native command handling.

We can initiate commands with buttons too, quite easily with the RichUtils.toggleInlineStyle method. Here’s all I needed to change:

What I did was add a button that has an onClick callback. Which then calls the method onUnderlineClick. RichUtils.toggleInlineStyle needs the editorState as well as the style you want to apply to your selection, and it will return a new editorState with the changes applied. Simple right? Of course you can do this for all sorts of things. Have a look at the RichUtils docs to see what other methods it offers, quite a few! Let’s do one more thing before we close of with this tutorial, let’s implement code blocks, since we love code blocks don’t we!

The RichUtils.toggleCode method lets us make a block into a code block. We can implement it the same way we did with the Underline button. I just need to change two lines of code.

Same concept, we create a method that modifies editorState, this time with the RichUtils.toggleCode method, and update the state.

And boom, here’s what we have!

I hope this helped getting you started with draft-js. Stay tuned for more and let me know if you think I’ve missed something!

Also, make sure you join the draft-js slack channel, there’s a bunch of awesome friendly folks on there!

Wow you reached the end of the page! Could that mean that you're interested in working together? Please get in touch early to avoid disappointment! My availabilty tends to fill up quickly.

Chat with me here or hit me up on Twitter